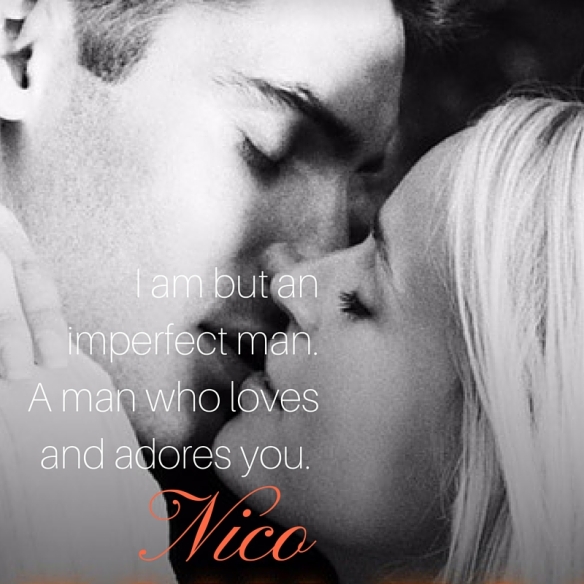 The Ferranti’s at home in The Dower House

*Sophia, in her pj’s, is sitting at the kitchen table drinking her bedtime milk. Swinging her bare feet, she eyes her papa who is nursing baby Eve through a milk induced coma*

“How come,” Sophia begins. “We have a dog-house, but we don’t have a dog? And how come you’re in the dog-house?”

*Nico sends her the side-eye*

“Is mama still mad because Luca got sick?”

*Nico understands very well his little girl has played him today, plus his wife is not happy with him. Bronte never sulks or holds a grudge. However, she still hasn’t had her ‘little chat’ with him. The mere thought of it makes his belly jump, which is crazy. He’s the man of this house. Nico Ferranti rules this particular roost. Doesn’t he?*

“Luca is feeling much better,” Nico says. “Mama is reading him a story.”

*Sophia sucks her milk in the glass through a straw, reaches the bottom and keeps slurping, making a noise that would certainly bring down the wrath of her mama if she heard it. Yep, his baby girl is playing him. Nico decides to try logic*

“You know how busy mama is. She is looking after the baby, cooking and looking after you and Luca and Tonio. Plus, she looks after me and runs the house. And she runs Sweet Sensations. Mama needs lots of help. As her family it is our job to care for her and help her. At this time a puppy would add an extra burden.”

*When Sophia’s little brow creases as she thinks through his argument, Nico reckons he’s on a winner. Until…*

“Then you need to help mama more. Luca and me are little children. Tonio isn’t old enough to help her. I want a Bacon Freeze. You need to step up to the plot and do your bit.”

*Nico’s jaw doesn’t drop, but it’s a close thing. Where the hell had all this come from? If he wasn’t mistaken some of those words came directly from Rosie Ludlow’s mouth*

“Yes. Auntie Rosie’s always saying that us women juggle five things in life, while the men in this family focus on one. How hard is it for you to give me a puppy?”

*Seems his baby girl hasn’t outgrown her habit of listening in to adult conversations. At the moment Sophia sounded exactly like Rosie. Nico stood*

“Time for bed,” he says, leads the way to the staircase.

*Sophia’s bare feet stomps on the wooden stairs, but Nico refuses to rise to the bait. On one hand he has to admire his daughter. If she wants something badly enough, she never, ever, gives up. Cristo, if he could bottle her focus and strong will, and have his management team drink it, Ferranti Enterprises will be unstoppable. The downside is her ability to manoeuvre situations, and people, to her will. She is five years old, for God’s sake. What the hell is she going to be like when she’s twenty? The idea didn’t bear thinking about. She tags along behind him as he places the baby in her crib. He leads the way to Sophia’s bedroom, and stands by as she climbs into her princess bed complete with canopy. She snuggles beneath the comforter, her eyes bright on his. Nico knows the time has come for him to take control of the puppy situation. He sits on the edge of her bed, leans over to tuck a strand of silver hair behind her tiny ear*

“Mama and me have said time and again, no puppy, and no kitten. If you continue to ask then you cannot be a flower girl at Marc and Elena’s wedding.”

*Sophia’s emerald eyes swim with shock and hurt. It breaks his heart to see her distress, but Nico needs to take a hard-line with his child. He shakes his head*

“I mean it. No means no. I do not want the daughter I love upsetting her mama, and causing mischief by using my cell phone without my permission. If you do it again, no flower girl.”

“You need to start thinking about consequences. When an idea enters your head consider if what happens next will be worth it.” He kisses her hot cheek, stands to look down at her. “Ti amo, cara. Go to sleep.”

*He shuts Sophia’s bedroom door. The house is quiet. Nico pads on his bare feet to his bedroom, to find his wife sitting up against white pillows, fingers rattling over the keys on her laptop. He closes their bedroom door, locks it. The sound of the lock has Bronte peer at him over the top of her reading glasses. Dio, he loves the sexy librarian look. Arousal burns low in his belly. After all this time together, it doesn’t take her long to recognize the obvious signs of his desire. Instead of closing down her laptop, she continues to type*

“I won’t be long,” she says, not looking at him. “I’m sending out an invoice, which if it isn’t paid in five days, I’m talking to my lawyers.”

*He heads for the shower, stripping off his T-shirt, unbuttoning his jeans*

“How much are you owed?”

“Do you need capital?”

“No,” she says in a sharp tone. “We’re solvent. But if this becomes a trend and more clients don’t pay on time then things may get tricky.”

“Did you take a deposit?”

“Yep. But it took two attempts before the funds cleared. Should have known this one would be trouble. Live and learn.”

*Nico enters the shower, flicks on the taps, and lifts his face to pounding water. He soaps up and lets his mind drift. Bronte didn’t like his interference in her day to day running of the business. But he was wondering if perhaps she had too much on her plate. Perhaps his daughter was right. Maybe it was time for him to cut back on his hours and be a more hands on husband and papa. He turns off the tap, steps out the shower and wraps a white towel around his waist, uses another to dry his hair. He enters their bedroom to find she’s switched off the laptop, and waiting for him. His belly trembles as she sits there, arms folded, with a look in her eyes that tells him she means business. He’s in trouble*

*Nico drops the towels, slides into their big bed to lie on his side and gaze at the woman he loves beyond life*

“Si,” he says, shooting her a smile. “I have been thinking the same thing myself.”

*Bronte jabs his pecs with a pointy finger*

“What possessed you to feed Luca soda and ice-cream? You know he can’t cope with a sugar high.”

*He takes her hand, kisses each finger. When her breath hitches, his mouth curves against her knuckles*

“We got carried away with the excitement of the game. Mi dispiace, cara. It will not happen again.”

*She slides down to lie on her side to face him, her emerald eyes serious. Seems he’s still not quite forgiven*

“What were you thinking not to include Sophia in your party? Can you imagine how hurt she must have felt seeing Tonio and Luca enjoying themselves with popcorn and treats, and having their papa’s undivided attention, while she was ignored? She lashed out against all of you. If you think about it, can you blame her?” Bronte asks in a soft voice.

*The truth of her logic hit Nico hard. The jolt, a mix of shame and guilt, has his brow crease. Dio mio, she is right. While he’d been bonding with the boys, he hadn’t thought of his daughter. Not once. He sits up in bed, runs a hand through damp hair. Perhaps he’d been too hard on a little girl who only wants something to love. Did that mean he isn’t giving her what she needs from him? His eyes found his wife’s and held*

“What can I do to make amends?” he asks, trusting her guidance.

*Bronte slides her hand over his shoulder to cup his neck and pull him close. The soft benediction of her mouth on his helps to heal a heavy heart*

“Spend more one on one time with her, and include her with the boys. And do not dare agree to a kitten or a puppy. Sophia Ferranti is not above emotional blackmail.”

*Nico grins. How the hell did he get so lucky to have such a woman in his life? A woman wise and loving to him and his children? He kisses her, loving the smell of her skin, the taste of her lips. And it doesn’t take long for the warmth of affection to turn hot. He rolls her to her back to cage her beneath him. Emerald eyes brimming with amusement and desire stare into his*

“Do you think you deserve to make love to me after your behaviour today?” she asks.

*He gives her big, big eyes as something hard and heavy, him, settles between her thighs*

“Si, I am but an imperfect man. A man who loves and adores you. A man who needs his woman,” he growls.

*Bronte laughs and wraps long legs around his hips, tilting her pelvis to encourage him*

“I know this,” she says, her voice a low purr. She steals his line, “Because you are Italian.”

Next installment coming next week, and we see more from the force of nature that is Sophia Ferranti, and the rest of the family, in SEAN coming soon

8 thoughts on “Time for another slice of Ludlow Life”