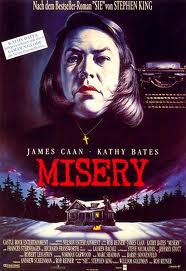 Do you guys remember Stephen King’s psychological thriller Misery with the awesome Kathy Bates and a tied to the bed James Caan?

Did it scare the bejeezus out of you too?

It terrified me let me tell you. In fact all of Mr King’s books terrify me – especially Salem’s Lot.

I still can’t watch that one alone. I need a big strong man snoring on the couch next to me.

But, back to Misery.

How would you like to meet the next Stephen King who just happens to be a woman? You would? Then let me introduce you to a certain August McLaughlin’s incredible debut In her Shadow 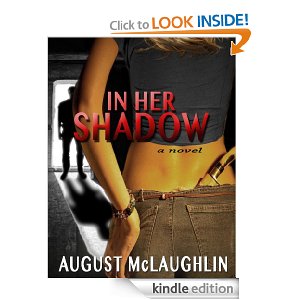 Fans of this blog *waving atcha* might have spotted that August occasionally drops by to comment if something catches her eye. And she  quietly released her book  just before Christmas but it didn’t take long for her work to make my radar twitch.

I began hearing good things about this book, like how it terrified a certain children’s author Lynn Kelley for example. So I bought it. And I’ll be honest, I’m nervous of psychological thrillers because they tend to remain in my overactive imagination, which is why I write romance. And just as I’d expected, this one lingered for far too long. Think sleepless nights. Thanks for that, August.

I left this review on Goodreads.

“Fans of Mr King and Mr Koontz will love In Her Shadow.

Psychological thrillers are not my usual reading candy but once I was immersed in the story, I couldn’t stop reading until the bitter end. The author’s main characters are well developed and linger in the mind – the sign of a good author.

This is an edge of the seat read with parts that made me wince. Eating disorders are always heartbreaking and the author doesn’t pull her punches in tackling the psychological fall out either.

I can’t wait to read August McLaughlin’s next work.”

And here’s August, she looks perfectly normal doesn’t she? Just goes to show how looks can be deceptive. The woman has a gruesome imagination.

According to her bio, the stunningly beautiful (physically and in her heart) August McLaughlin is a Journalist & author of psychological thriller, IN HER SHADOW. Former model/actress, dream-seeking lifer. Compulsive blogger,#GirlBoner founder. Rep’d by @DGLM Los Angeles, CA.

One woman locked in a basement, nearing death and longing for escape. Another baffled by the inexplicable symptoms wreaking havoc on her life. Both are lost and alone, yet somehow connected. And time is running out…

Near the tenth anniversary of her parents’ unexpected death, Claire Fiksen, a lovely young Harvard-grad and gifted psychologist in Minnesota, develops bizarre symptoms of an eating disorder that threaten her fledgling career, her relationship with a handsome young medical student, her grasp on reality and, soon, her life.
When her beloved grandfather reveals that there may be more to her parents’ death than she’s realized, Claire’s pursuit of healing becomes a desperate search for answers as she delves into her family’s sordid past. Meanwhile, someone is watching her every move, plotting to draw her into her own twisted web of misery.
Claire has something he needs, and he’ll stop at nothing to obtain it. Every step Claire takes brings her closer to the truth and danger. And her life, she discovers, isn’t the only one at stake.
Find August here:

So what books have lingered too long in your mind?

Have any kept you awake at night worrying about what happens next?

Or have any scared you so bad you’ve left the light on?

23 thoughts on “CHILLED TO THE BONE”